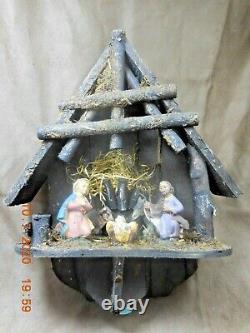 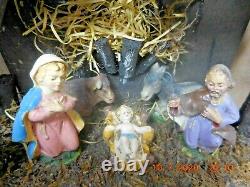 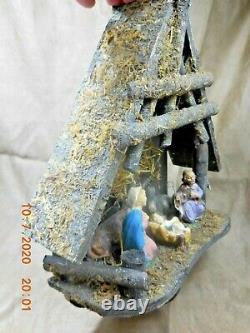 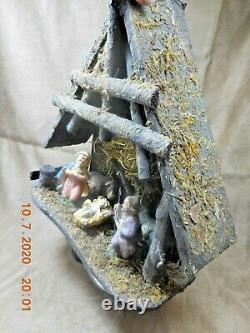 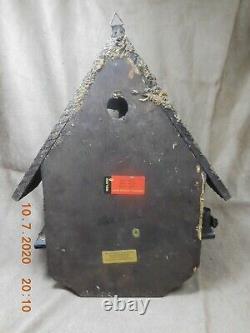 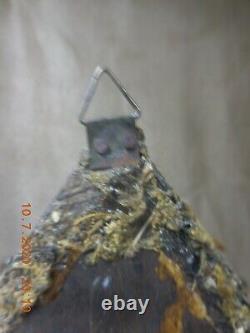 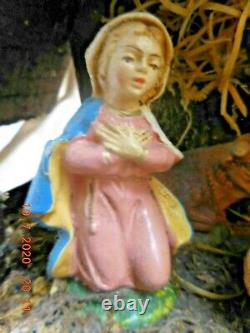 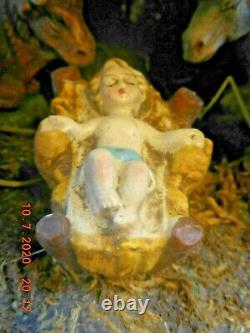 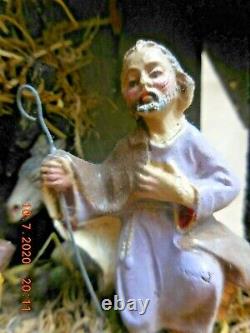 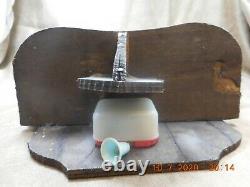 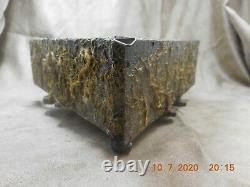 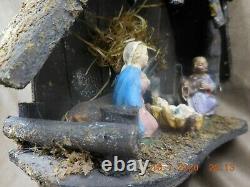 This is a rare, hand craved Creche (nativity scene of the birth of Jesus) musical piece from the ANRI company of Italy, circa the 1960's/ 1970's. The figurine's in the piece are hand carved and hand painted, and the piece is designed to be hung on a wall via the hanging hook at the top of the piece (see photos). The piece features a Swiss made Reuge 1 tune 18 note musical movement, which has a pull string that acts to both wind the mechanism and begin musical play. DIMENSIONS: 10-3/4" wide x 13-1/4" tall x 4-1/2 deep. History of ANRI Wood Carving.

It all began in the late 19th century when Alois Riffeser traveled to the major European cities to sell the wood carved figurines and toys which were bought from the farmers of the Gröden Valley located in the Dolomite region of the Alps. This area in South Tyrol was part of Austria-Hungary at the time until being annexed to Italy in 1919. In 1912 Josef Anton Riffeser founded the ANRI Company, which he named using the first two letters of his first and last name. After World War I, where he was in a prisoner of war camp in Siberia, he formulated his plan for a woodcarving company.

He created his own models which he distributed successfully, mainly in the Alpine region. Josef's wife, Carolina Riffeser ran the company during the difficult years of war and the absence of her husband. She was especially influential as her social positions were well accepted and gained the confidence of the home workers. She also inaugurated the first canteen of the region. When Anton Adolf Riffeser took over in 1945, he transformed the ANRI company, adopting a more industrial model which allowed for better quality control and distribution to new markets. He was followed by Ernst Riffeser who was able to enlist the services of many well known artists including Juan Ferràndiz, Sarah Kay and others.

Additionally, as the sole North American distributor of REUGE & ROMANCE movements, The Music Box Repair Center Unlimited, has a complete inventory of Reuge & Romance mounting hardware & replacement parts. We also carry all the replacement parts for the THORENS AD30 4½ disc mechanisms & those made later by Reuge - Romance. Additionally, we stock the world's largest selection of Thorens 4½ inch Discs, with over 300 different tunes to choose from. Thank you for your time and consideration of our music boxes, parts and services. Please let us know how we can be of any service to you, or your friends & family for music box parts or repair/restoration services.

This item is in the category "Collectibles\Decorative Collectibles\Music Boxes". The seller is "musicboxrepairman" and is located in this country: US. This item can be shipped worldwide.